Yesterday, across the Braambergstraat, “Jilles“ opened, a new hamburger restaurant. In Ghent there’s been one open for a while, in Bruges they decided to go for the lovely house where Yellow, the pop-up of Hertog Jan used to be. A nice corner house, close to the Fishmarket, that has been renovated intensely. A cosy courtyard makes sure that you’re not disturbed by the busy traffic.

They are open every day from 11 AM until 11 PM, and that’s not the only similarity with the other hamburger place that opened last year. There are ten burgers on the menu, even vegetarian alternatives and “spitsburgers”, a hamburger bun with grilled ham. You need to order French fries separately, but a nice salad is always included. 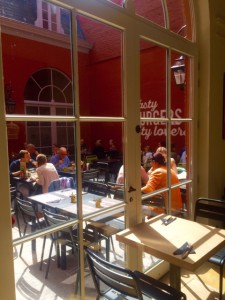 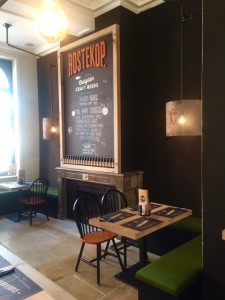 It’s lovely that every burger has a matching beer, chosen by the beer sommelier. Jilles has something with beers. For the opening in Bruges, he ordered an exclusive amber beer, brewed by brewery  Fort Lapin, the Rostekop, referring to the colour of the hair of Jilles.

When nipping of our Gin&Tonic, we dived into the menu and we found what we were looking for in the Bacon, Royal Cheese and Cheeseburger. They were served smoothly on the terrace where we were sitting. We found a place in the shadow, because they don’t have any parasols (yet).

A lovely burger, beautifully served, a salad in a closed jar and a watchful napkin. That looked great! 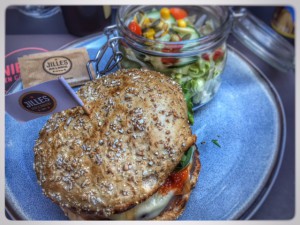 The bread roll wasn’t soggy, the garnishes tasted intense. Nice plates by the way. Didn’t we have some remarks? The magnificent French fries were buried under an excellent mayonnaise, a little pot would have been more convenient. And we missed a bit the taste of the searing of burgers on a hot grill. That’s an extra taste sensation, and, according to us, part of a hamburger…
The Rostekop and Sint-Bernardus 12 washed away everything, Marieke enjoyed the homemade ice tea. We concluded with a coffee and asked for the bill. We payed 88 euros for the three of us, a Gin&Tonic is not cheap of course…

Jilles is a nice place, the staff is friendly and the burgers are great. The interior is cosy, and the different rooms give you the feeling that it’s never really crowded. The beer pairing is a nice addition, and the extensive beer menu, although a rarity in a burger restaurant, is a lovely bonus.

By brugsevertellementjes in Culinary on 11/04/2016