At the location of what used to be Hertog Jan, L.E.S.S. opened under the watchful eye of Gert De Mangeleer. Love, Eat, Share and Smile, that’s all you have to do… At L.E.S.S., it’s all about “sharing”. All the dishes are served in the middle of the table, so you can shamelessly taste the order of your table companion.

Tapas are very present at the menu, and if you’re in a tapas mood, the bill won’t be friendly. We went on an evening during the week and the place was crowded, despite the early hour(19h30). Two lovely ladies were in charge for the service, and are doing that in a quite informal way.

During the aperitif, we took a closer look at the menu, and eventually we chose four tapas. Upon recommendation of the waitress, we took a fifth, pan con tomate (€3).

Our tapas were served pretty quick. The portions aren’t overly generous, which seduced us to order some more. We enjoyed the filet of tuna with grilled sweet paprika, little cockles with tomatoes, nicely presented in a tin can. Furthermore, we had three delicious dim sum of wagyu and one ceviche of salmon. The recommended pan con tomate is served per two, later we discovered that a piece of bread costed €3. 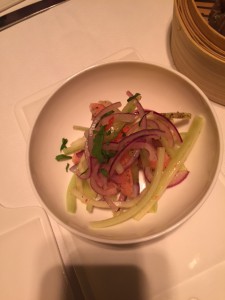 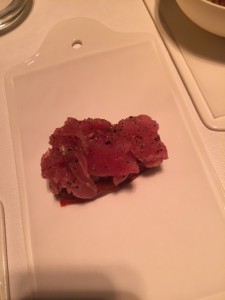 So we went for a second tour before choosing the main course. A direct hit was the little paprika filled with fresh goat cheese. Then we went for a tasty homemade white blood sausage and sepia a la plancha with garlic. 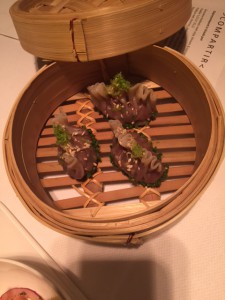 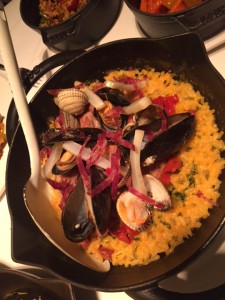 Time for our main courses. Paella and Pluma Iberica, two lovely portions with separate pots of vegetables. Great to taste the two dishes. Because the paella-rice stood a bit too long under a lamp to keep it warm, the top layer was a bit dry. If they had given the dish a swirl before serving, than the problem would have been solved. 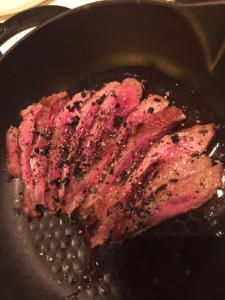 We were tempted to order a dame blanche and a lemon sorbet with homemade limoncello. It reminded us of Yellow, a pop-up restaurant at the Vismarkt. The vanilla ice cream got scooped out at our table, and somebody came to pour the chocolate sauce out of a large pot, magnificent! Hindsight, there were some more “Yellowdetails”, like the Staub cooking pots on the table.

While drinking the coffee we became a bit Yellow, because of the tea from a bag (€4,50), Illy coffee and two pieces of chocolate with salted caramel.

The bill was high, €208,50 for the two of us, including an aperitif and each two glasses of wine, isn’t a cheap meal. This had to do with the tapas that we ordered (extra). On the menu they are low priced, but if you count everything together, we spent €70,50, just for the tapas. If we didn’t order extra tapas, we had the feeling that we would have been out of that place after an hour, so we had no other option than to sacrifice ourselves…

By brugsevertellementjes in Culinary, Lunch on 08/02/2016