Sans Cravate is closed, at least for a couple of months, because of drastic renovations and expansions. Luckily, since a couple of years, the “pop-up” idea keeps chef and employees busy during such periods.
And it is an excellent opportunity for the chef to try something completely different. That’s why pop-ups are often nice little restaurants with a unique atmosphere. And that’s definitely the case with Re-Belges. We’ve been in Sans Cravate before, so we were very curious what there temporary housing would offer us. There’s no far detour: the pop-up is just across the street, where you can also find La Suite, the B&B of the restaurant.

There’s a lunch every day, but also a limited menu for when you want to dine more extensively. They are cooperating intensively with a French vine grower, which is translated in a specific wine card with two champagnes which are available by the glass. Because of the (for us too) high price of €19 per glass, we decided to go for a gin-tonic. The menu, in the shape of a shirt with a tie, looks really nice by the way.

The lunch this afternoon was pork belly with zurkelpatatoes (€19 + coffee) – which was presented on one of the other tables. Just like this dish, the menu is predominantly traditionally Flemish.

As appetizer, we chose the dried West-Flemish “red” with fresh yuzu butter and razor-thin roasted bread. (€17). Shrimp croquettes (€14) and scallops (€15), made according to the rules of the art, were our starters. No comprises when choosing ingredients, and it was all beautifully presented with a casserole of tuber vegetables, which were, just like my scallops, perfectly cooked. 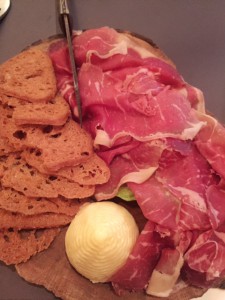 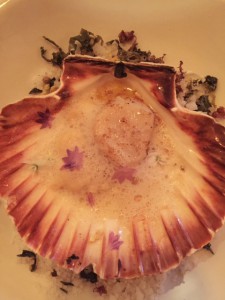 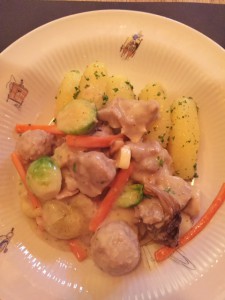 No pulled pork or cod with mousseline potatoes for us this time. We botch chose the diced veal (€23), served in a nice old-fashioned terrine with boiled potatoes. Definitely a generous portion! We were very impressed by the flavour and the preparation. The combination with the gueuze was absolutely astounding.

We finished with a dame blanche (€9), coffee and tea.

The amount of the bill was €145 for both of us, not small, but we had three courses. If we solely had eaten the lunch, it would have been more economical, but, once you see the menu, you want to taste it all (or we did J). The prices of the desserts are not expensive, and we got two decent croquettes for €14, and half a litre of water only costs €3, just like the coffee and the tea.

Together with the friendly service, and the chef, who is serving the dishes as well, it’s a pity that the pop-up is only open until the middle of March. Some concepts are so genius that they may continue to exist, just because of their simplicity.

By brugsevertellementjes in Culinary, Lunch on 08/02/2016